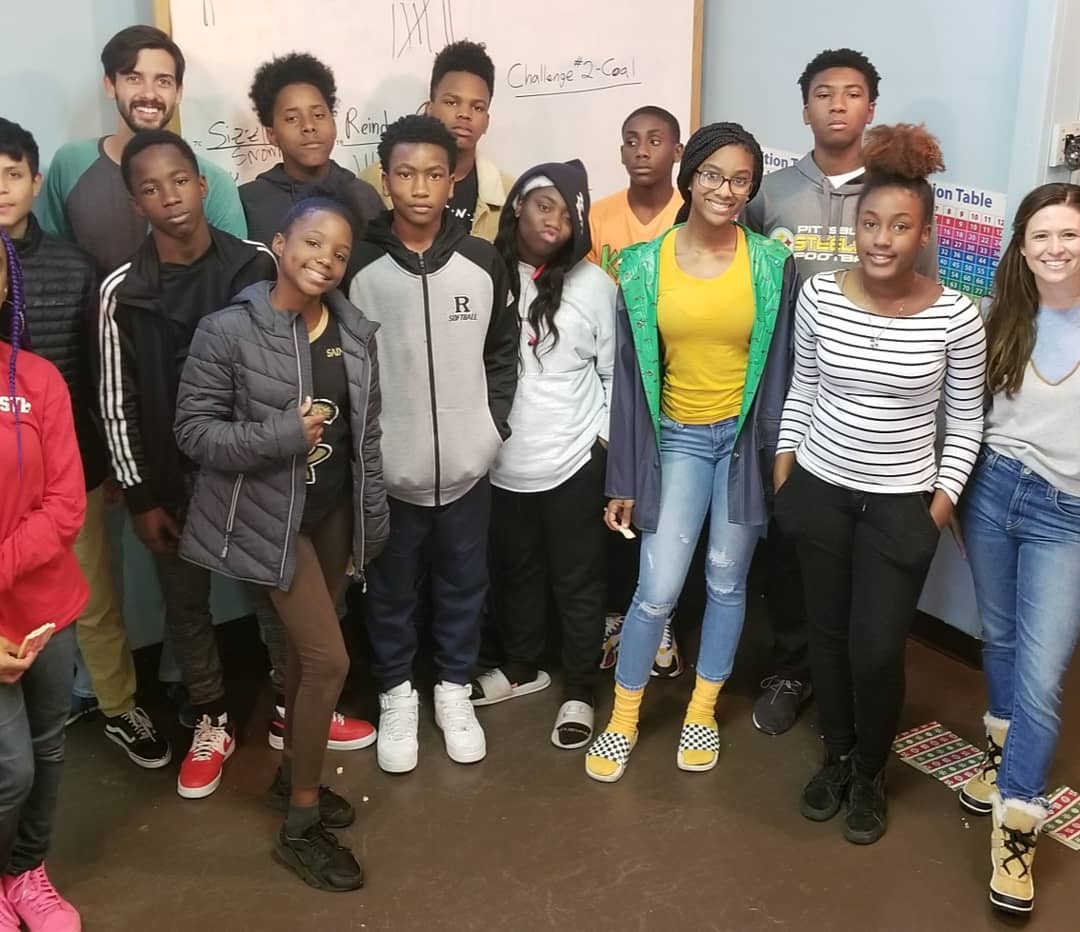 Using Block Coding we can bring our “Reindeer Bots” to life!

Do you have a MakeBlock “Codey Rocky“? Here is the Reindeer Challenge:

This summer we focused on using web development tools to develop our own webpages from scrap!

A NOTE FROM KINSEY ABOUT CODING CAMP 2018

This past summer was one of the most rewarding summers in recent memory. Once a week I would work  with the JSTEP kids, a group of 10-15, teaching them how to code (computer programming). My name is Kinsey Schell, and I’ve worked with JPM for the past year as a tutor during the school year and as a volunteer for various outreaches. I graduated from Washington and Lee University with my BA in Computer Science and since then I’ve worked in the Tech Industry as a Software Engineer for a company based out of San Francisco.

When Debra and Rachel first asked me if I wanted to teach a coding program during their summer camp, so many ideas popped into my head. I was overcome by visions of flying drones on the black top, bots autonomously navigating mazes, campers engaged in problem solving, and block coding. Naturally, I had to say yes. Debra and Rachel took a “sky is the limit approach” and with that encouragement, I could dream big. From the get-go, it was important to me that we took an IOT – Internet of Things – approach instead of just sitting behind a computer all summer. Through donations we were able purchase four drones and five robots to program with Scratch. Then, I started planning.

Every Thursday I greeted an enthusiastic assembly of JSteppers with a new lesson. We started off with a bot called the Codey Rocky by MakeBlock. We began by using motion sensors to direct the bot to turn left if an obstacle had been encountered. In teams of 3 or 4, the kids huddled around laptops and iPads snapping their code in place, running it, and seeing what happened. As the lessons grew more complex, so did the rewards and frustrations. One lesson was particularly challenging: the maze. After we had experience with event driven programing (listening for events, and then firing different actions in response) we tackled one of the more challenging problems that arises in the field of robotics – what to do after an obstacle is encountered.

We assembled cases of water bottles, blocks, and books to make a winding maze. The goal was to build up slowly, start by moving the bot forward, make a sound when an obstacle is encountered, then turn right and move on. This was met with some questioning from the kids. As they correctly noted, if the bot always turned right, it would never navigate the choice of right or left, and most likely never navigate through the maze. I remember Earl wanting to immediately jump into the logic. He held the Codey Rocky in his hand and guided it through the maze, telling me exactly what he wanted the bot to do. Earl had picked up block coding very quickly over the course of the past few weeks, and it clearly came naturally to him. Unfortunately, when he went back to his team to execute what was seemingly sound logic, the code wouldn’t run properly. (Note, this is a frustration I encounter with coding daily!) Not only was Earl frustrated, but so was the whole room. It was a moment when I had to remind myself that my personal goal for the summer was not only to expose the kids to coding, but let them learn. It was hard not to cave and just give them answers to the problem, but with a little coaching, all teams learned how to navigate the maze! After that milestone, we were ready for the drones.

In the final weeks of the summer, we were able to use the drones to race in hovercraft mode and to fly in air mode. We had amassed the knowledge from the Codey Rocky, became expert Scratch writers, and were able to stick with that same language to snap together code to make our control panels. The kids used their new programming chops to make the drones hover, increase their altitude, make turns, accelerate, land, flip, make a circle, draw a triangle, draw a square, and light up, among other various tasks I would challenge them with. Instead of having predetermined lessons with steps, I wanted the kids to enjoy what they learned and let their imaginations go. We had a great time putting together obstacles and learning to pilot the drones (which is very hard, and we are very thankful to the neighbors who helped rescue drones that went rogue!). Thursday went by so quickly just as the summer went by. A Thursday always ended with protests from Jose pleading for just 5 more minutes. I have so many more ideas for activities involving the drones, and I can’t wait to continue!